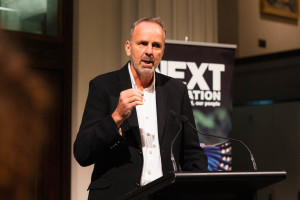 NEXT CEO and Old Boy Bill Kermode (1972-76) has had to change his sabbatical plans due to the COVID-19 crisis.

But before lockdown, he was privileged to travel to Antarctica and hear a story of resilience – with lessons we may be able to draw on in this period of adversity

A key theme for me (and my bubble partner, wife Robin) in getting through a month of self-isolation is resilience. Like many New Zealanders who were overseas in recent weeks, we had to change our plans and return to New Zealand, but just before that we had been privileged to travel to Antarctica and so connect with one of the most remarkable stories of human resilience I know. That is, of course, the story of Antarctic explorer Sir Ernest Shackleton. The account of Shackleton’s perseverance and persistence in the face of seemingly impossible odds has been often told. And it gives some useful pointers for us as we begin our own challenging journey into an unknown. In 1914 Shackleton and a crew of 25 set off on an expedition to be the first to walk across the Antarctic continent. Soon after leaving their South Georgia Island south seas base, their ship, the Endurance, got stuck in the ice. Shackleton realised that his men would have to wait out the coming winter in the ship’s cramped quarters until summer’s thaw. They then lived on the ship and the ice for close to 11 months, with no hope of rescue and no way to call for help. Then the ship was crushed by the ice and sank. The men set up camp on the ice, but eventually were faced with the ice breaking up and needed to get to solid land. After a week of rowing in lifeboats – having now visited the region I find even just this part of the story unbelievable – they reached Elephant Island, off the Antarctic Peninsula but offering no protection and not on any shipping routes. So Shackleton decided he and a small crew would row for 800 miles to get back to the South Georgia whaling station they had left about 15 months before. After 17 days and one hurricane crossing one of the world’s most treacherous seas in a glorified rowing boat, they reached South Georgia, only to discover they were on it’s wrong side. They crossed 35km of mountain ranges and glaciers to get to safety, and three months later rescued the men they had left on Elephant Island. Incredible. So what are three things we can learn for ourselves from Shackleton’s amazing mission?