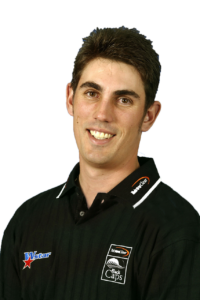 Mathew played a variety of sports at school but it was cricket where he excelled. If there were people prepared to bowl to him, he would bat anywhere any time. He received the Page Trophy for the Best Third Form Cricketer and a number of other awards for the 1st XI cricket including the Retemeyer Brothers Trophy for his magnificent 122 versus Auckland Grammar. Skippy had a great relationship with Phil Gosling who taught him and coached him cricket and rugby. 1st XI coach Alec Astle predicted he had the ability and mental attributes to reach the highest level of the game. He was PNBHS 1st XI Cap number 606. Mathew was vice-captain of the 1st XI, vice-captain of Gordon Club and a School Prefect.

His debut for the Black Caps against the West Indies on Boxing Day 1999 was a memorable one where he scored 214. He still holds the equal world record for the highest test score for a number three batsman on debut and holds the NZ record for the highest score on debut. The next season he followed this with another double hundred; 204 not out against Pakistan. He played 33 tests (Cap number 208), 54 One Day Internationals (Cap number 113) and two T20s (Cap number 8) accumulating nearly 3,000 international runs.

Mathew had 18 seasons with Central Districts.