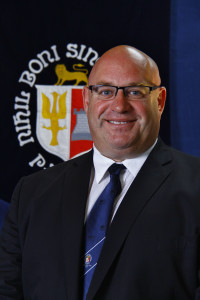 April 2018 marked the departure of Justin Doolan, on sabbatical to Auckland Grammar School, from the PNBHS teaching staff. This became permanent at the end of last year and ended a chapter of his long association with the school. Justin was a student from 1981-85. He was a school prefect, member of the 1st X1 Cricket, 1st X1 Hockey and 1st XV Rugby. He was part of the school’s inaugural cricket tour in 1984 and held the record for the school’s senior 400 metres hurdles. Justin’s father John also attended the school, as did his brother Scott.

Rector, Dave Syms employed Justin to join the teaching staff in the school’s centenary year 2002. Justin immediately immersed himself in all aspects of school life. He taught (some would say entertained) in Social Studies, Business Studies, Economics, Physical Education and Health. He was the Year 9 Dean 2004-17 and provided a unique approach to this role where he proudly guided many Year 9’s into the PNBHS environment. Justin was Master-Charge of his beloved Gordon Club from 2009-16. Of note, the Doolan family have sponsored the Gordon Club banner and also the Doolan Family Cup for Gordon Club Leadership. Justin ably fulfilled the role of Assistant Manager at College House 2006/07. The Justin Doolan Cup for courage, integrity and loyalty is awarded annually for a Year 9 boarder. His contribution to the co-curricular aspect of the school has been immense. He has been coach or manager of activities including; cricket, hockey, rugby, football, swimming, triathlon, sevens, badminton, basketball and mountain biking. He often offered to help groups when no other staff were available. Justin was the Junior Manager for the Hockey Development Tour to Singapore and Malaysia. He was an integral part of two very successful Commerce Tours to the United States. His fundraising Commerce Ball was one of the largest social occasions the school has ever hosted. Justin has been a prominent member of the Old Boys Association and provided an amusing travel companion for the last two Rectors and their guests.

Justin will be long remembered for his significant contribution to the role of Year 9 Dean. The “Oooop” call is famous as his way of getting 400 boys to sit up and listen. A bellowing “Oooop’ and all boys froze, immediately quiet and awaiting instructions. He is a master of controlling the crowd when getting the boys into the Speirs Centre, into the hall or other venues en masse. No one else can do it like Dooly. He was reliable and invaluable when leadership was featuring in the Speirs Centre. You could count on him being there 10 minutes early guaranteeing everything was under control. He can control 400 boys like a teacher a class.

Justin would be walking across the school’s quadrangle when a Year 9 would approach him and his face would “light up” after a humorous or encouraging remark. Everyone knew Dooly and he seemed to know everyone. Many new boys arrived at school with “I know your dad/mum” was common. The young boys always felt special. He has a particular affinity for those who were not only new to the school but also new to the country and had words to make them feel welcome. With his incredible linguistic skills he was able to have a loose conversation in many languages. The Japanese students loved him and were astounded when they realised he could speak fluent Japanese. Of course, his stories, some of them were true, using different accents and impersonations are legendary. He is able to find the funny side of any situation by being jovial and happy.

Justin’s ability to ad-lib was invaluable to fill in time when on many occasions an event finished early in the hall and a year group had 15 minutes to the bell. He would talk to the boys and 15 minutes of laughter and insights would go as if the time remaining was only one minute. The boys left inspired and in tears.

The infamous hand grenade incident will be long talked about. At the time of Rector Tim O’Connor, Dooly was asked to do a book review. It was, of course, a book about the special forces. Dooly had set up the finale – he threw a ‘hand grenade” (actually a potato with a nail in it) from the stage and Carroll Walkley (HOD Chemistry) let off an explosion just outside the hall doors. Unfortunately, the “mix” was a little heavy and the explosion was deafening to all in the hall followed by smoke which filled the hall, setting off the fire alarms and resulting in an evacuation. The Rector was not impressed.

The Year 9 students he taught certainly thought he was special. There was always some inkling he was “spinning a yarn” but they never knew when. His classes genuinely thought he was a Vietnam War Veteran and was shot down over the Jamboozie River. Suffering “flashbacks” was a common occurrence in his classes. He would tell them that if management knew he had “flashbacks” that he would lose his job. The boys were always loyal – being asked by the Rector if they had ever witnessed Mr Doolan having flashbacks…their reply was always ‘no sir”, even if they had witnessed one only minutes before.

JJC Doolan, a larger than life character both literally and figuratively. He can look back fondly on what he has achieved at PNBHS. Justin has created a legend and memories that will be among us for many years. All the best for your new challenge Mr Doolan.